Sun Country Airlines wants to add to their bottom line by becoming the latest publicly-traded U.S. airline. In regulatory filings, the Minneapolis-based airline revealed their latest prospectus showcasing their strengths as a low-cost carrier focused on a “visiting friends and relatives” strategy.

Sun Country Airlines believes they have a $100 million strategy with their low-cost model and focus on “visiting friends and relatives” markets across the country. Now, the airline wants to put their money where their mouth is with an IPO offering. The Minneapolis-based carrier offered a look at their plan with a prospectus filed with the U.S. Securities and Exchange Commission.

Airline Points to Dynamic Scheduling, Relationship with Amazon and Operating Margin as Strengths

In the 61-page prospectus, the airline is wooing investors based on their operational model: flying where people want to go at a price they can afford. The airline is pointing to several of their practices as competitive strengths, including their low-cost business model and cargo relationships.

When it comes to scheduling routes between the 53 airports in their network, Sun Country says their scheduled services are all based on customer demand. In 2019, the airline says they flew “approximately 38 percent of our ASMs [available seat miles] during our top 100 peak demand days of the year as compared to 15 percent of our ASMs during our bottom 100 demand days of the year.” Moreover, only three percent of the airline’s routes are year-round, an advantage which “allows us [Sun Country] to generate higher TRASM [total revenue per available seat mile] by focusing on days with stronger demand.” 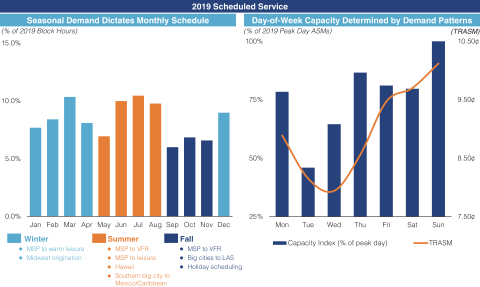 In addition to using their schedule to maximize revenue, the airline says their operating income margin is the best in the industry. Because of their charter business and operating 12 cargo aircraft on behalf of Amazon, the airline had an operating income margin of 7.4 percent. Through the third quarter of 2020, Sun Country data shows they were one of two airlines with a positive margin – the other being fellow low-cost carrier Allegiant Air. 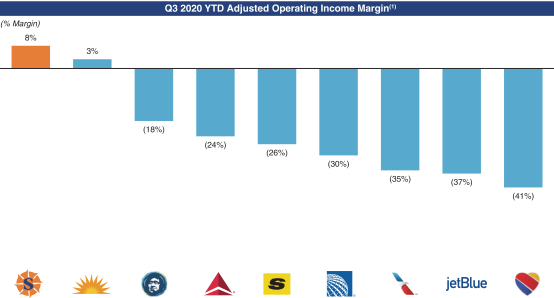 Finally, the airline points to their in-flight and digital experience as part of their overall operational advantage. Despite having one of the oldest airline fleets in operation, the cabins are outfitted with seats featuring 31 inches of pitch and full-sized tray tables, giving customers “comparable legroom with Southwest Airlines.” Flights also feature seat-back USB power outlets, in-flight entertainment and complimentary beverages. For their digital experience, the carrier partnered with Navitaire, a passenger service system which they say has decreased website session length and reduced the number of transaction failures.

While the prospectus explains the airline’s perceived value proposition, there are still several questions left to be answered by Sun Country executives. The airline has not placed a target price for their IPO, nor have they determined how many shares they will offer to the public.