Delta Air Lines wants to raise $6.5 billion in loans secured by their loyalty program, SkyMiles. To attract potential investors, the airline is peeling back the curtain of the frequent flyer mileage scheme, showcasing its revenue, the number of members they have, the average tenure of a Medallion elite, and exactly how much they make from their partnership with American Express.

To raise funds and maintain liquidity during the COVID-19 pandemic, the legacy carriers have turned to a familiar profit center: their loyalty programs. In June 2020, United Airlines sought a $5 billion loan secured using MileagePlus as collateral, while American Airlines valued their AAdvantage program up $31.5 billion.

Executives at Delta Air Lines are now taking a similar wager, offering $6.5 billion in senior secured notes secured by SkyMiles’ financial position and user data. As part of the offering, the airline is showing investors the deep, internal workings of SkyMiles in their latest 8-K filing with the U.S. Securities and Exchange Commission

Established in 1981, Delta tells investors their program has grown to over 100 million members strong, with over 25 airline partners and over 40 non-airline partners. Their elite Medallion flyers are also fiercely loyal to the carrier, with an average tenure of 13 years.

Like other programs, SkyMiles is dependent on their credit card business to grow profitable. As flyers earn miles, Delta and their credit card partner American Express purchase miles from the program, thus increasing SkyMiles’ revenue. In 2019 alone, the credit card issuer contributed $4.2 billion to Delta, making them the biggest partner. The 2019 contribution alone showed a quadrupled increase from 2009, and reflects what the airline said during their presentation at the 2020 Cowen & Co. conference. 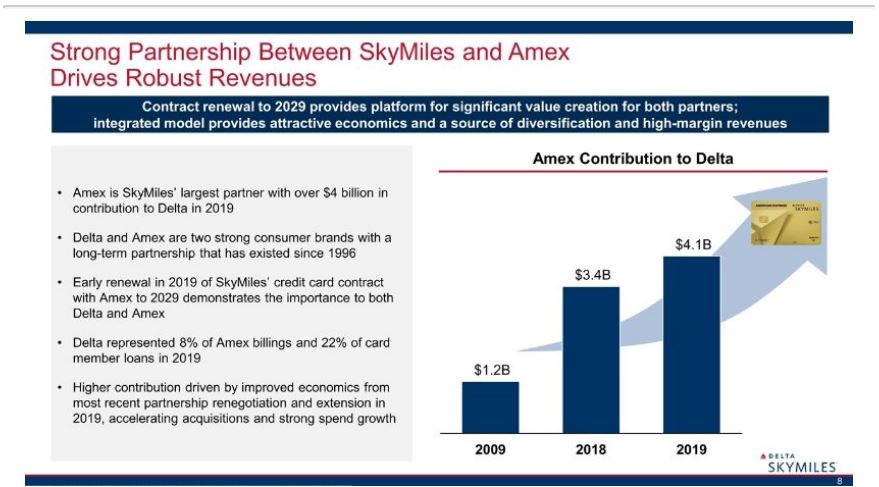 How much does SkyMiles make in a year? According to the Atlanta-based carrier, at the end of 2019, SkyMiles reported a net income of $2.49 billion, an increase of over $500 million from 2018.

In addition to having a very profitable program, Delta also has one of the most diverse among all carriers. The airline’s loyalty program is almost evenly split in members under 34 to over 55, with the largest being between the two age groups. The majority live in non-hub cities, have been SkyMiles members for over four years, and have an annual income between $51,000 and $99,999. 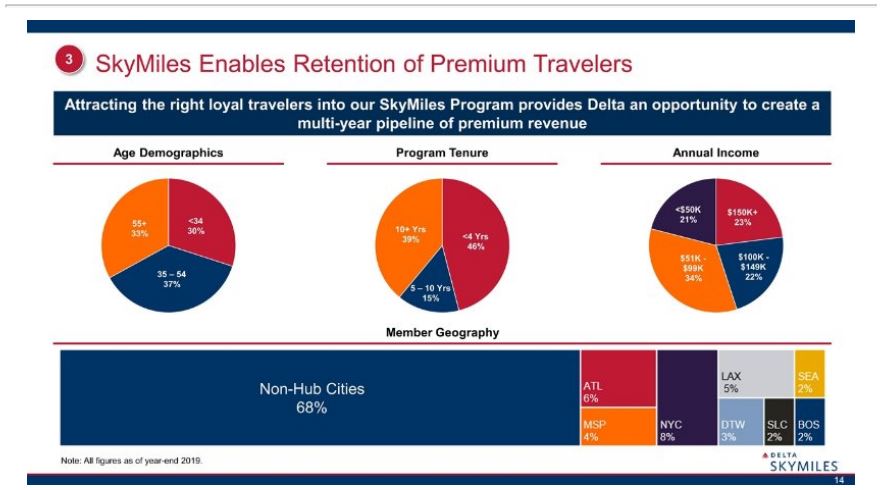 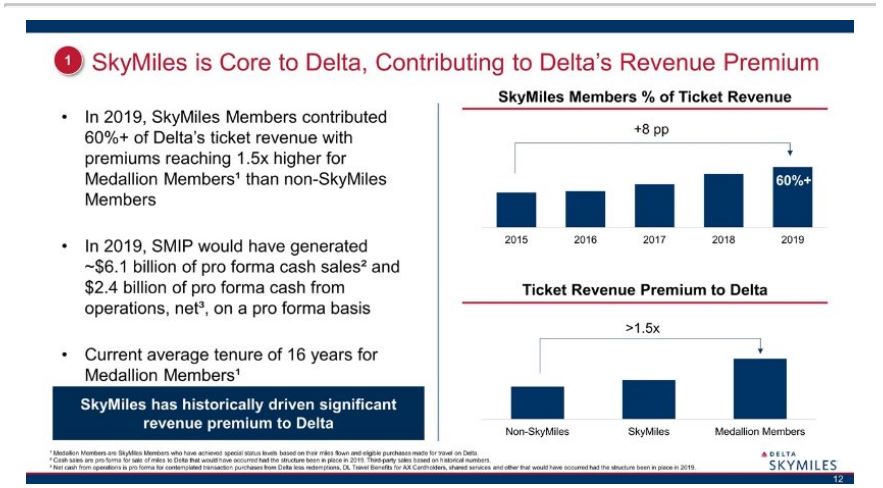 SkyMiles’ Bookings Down Due to COVID-19, But Profits Unhurt

The financing from the SkyMiles program couldn’t come any sooner for Delta, which is planning continued deep capacity cuts through September 2020. In their filing, the airline announced they would only fly 40 percent of their capacity compared to September 2019, with international capacity cut by 80 percent and domestic capacity cut in half.

Furthermore, Delta reports that SkyMiles ticket revenue is equally hurting, as award booking dropped by 78 percent through the first half of 2020. Despite this, the program is still going strong, as “cash received from sales to American Express declined by less than 5 percent year over year to $1.9 billion, as SkyMiles members continue to use co-brand cards.”

The senior security notes offered by Delta will be backed by SkyMiles IP Ltd., a company formed by the airline in the Cayman Islands. The airline hopes to use the loan against their loyalty program for “general corporate purposes and to bolster its liquidity position.”