In a counter-blow to data suggesting passengers have a reduced chance of contract COVID-19 aboard a commercial flight, pre-published data from the New Zealand Institute of Environmental Science and Research suggests the virus can be spread in-flight. During mandatory quarantine, researchers say seven flyers tested positive for COVID-19, with a point of infection potentially being the aircraft.

Airlines and aviation organizations have spent thousands of dollars on research, all suggesting that it could be safe to fly during the COIVD-19 pandemic. A new study from the New Zealand Institute of Environmental Science and Research suggests the opposite, focusing on one flight to note that the novel Coronavirus could have spread between flyers while aboard their aircraft.

The research focuses on six passengers aboard Emirates Flight 448, departing Dubai for Auckland via Kuala Lumpur on Sept. 28, 2020. During the travel aboard the Boeing 777-300ER, the pre-print paper reports mask usage was not mandatory, but four of the six passengers say they were both wearing face coverings and gloves.

The group, including a family of four and 11 others, all sat within five rows of one another in the economy section. During the refueling stopover in Kuala Lumpur, none of the passengers deplaned from the aircraft.

Upon arrival in Auckland, the group split up into three managed isolation and quarantine facilities. During their time in observation, the first person to report symptoms on Oct. 1, 2020, which researchers say is “consistent with being infectious during flight EK448 two days prior.” Days later, three more passengers ultimately tested positive for the virus, which the report suggests is “consistent with in-flight transmission.” 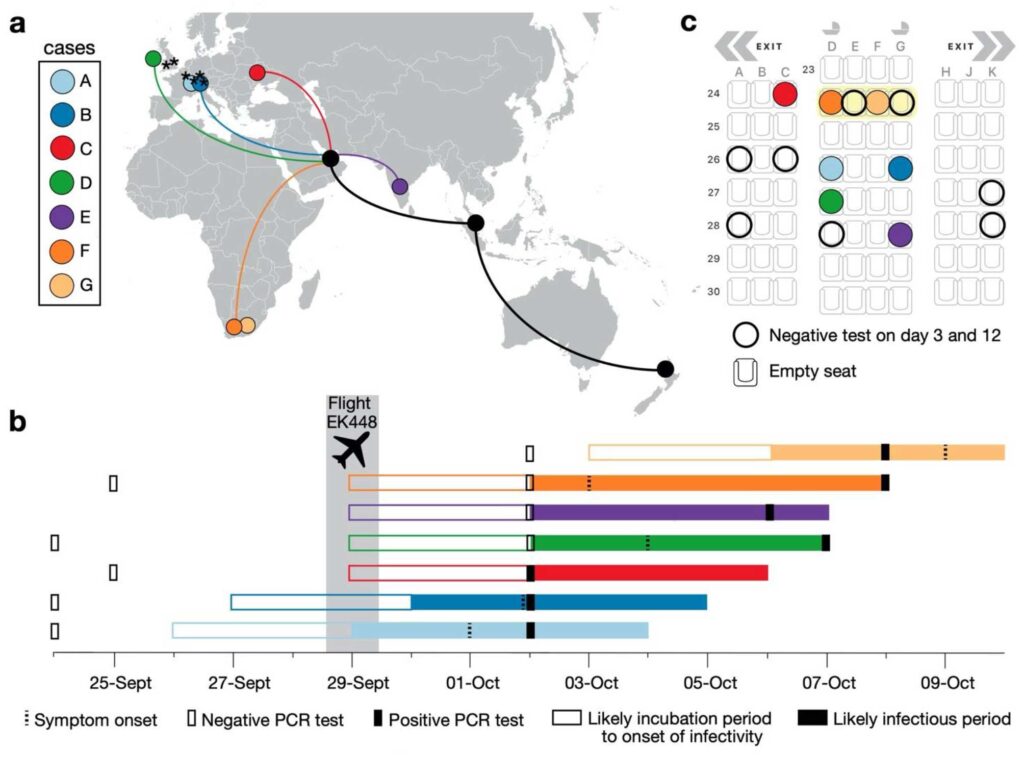 “These conclusions are supported by genome sequencing, an in-flight seating plan and dates of disease onset,” the report reads. “These data do not definitively exclude an alternative exposure event such as transmission occurring at Dubai airport before boarding, for example during check-in or in boarding queues. However, the close proximity of the relevant passengers on board during the flight suggests that in-flight transmission is plausible.”

Noting previous studies which suggest that COVID-19 was passed between passengers aboard a flight, the study concludes that it is possible to transfer the novel Coronavirus while traveling. Although the data is not 100 percent definitive that all the cases were transmitted aboard the flight, the report “underscores the important of considering all international arrivals into New Zealand as potentially infected with SARS-CoV-2 even if pre-departure tests have been undertaken.”

The study does not attempt to hold Emirates responsible for any alleged spread of the novel Coronavirus aboard the aircraft.

Reports Adds to Questions About Safety Aboard Flights

While the paper still needs to be published in a medical journal, the research adds more questions to previous studies about virus spread aboard aircraft. Previously, a U.S. Department of Defense study with United Airlines suggested that face masks could help significantly reduce the odds of contracting COVID-19, while another study published in the Journal of the American Medical Association suggested that in-cabin airflow minimizes flyers exposure to any virus present on the flight.